1. In the USA, which of the following flags is the only one that is allowed to be flown above the 'Stars and Stripes' ?
a. Red Cross
b. French Tri-colour
c. United Nations
d. Olympic

2. Which city has the most taxis worldwide ?
a. London
b. New York
c. Mexico City
d. Moscow

3. Before the angel Gabriel appeared to Mohammed in February 634, in the direction of which city did the prophet and other Muslims pray ?

4. What kind of ethereal requests were not allowed in the USA during most of World War II ?

5. Tem?jin (Temudschin) was more famous under a nickname which translated meant 'world ruler'. What was Tem?jin's nickname ?

6. Which popular book amongst both children and adults appeared in 1917 with a swastika on the cover ?

7. The practice of which popular art form was forbidden in New York state for most of the 1960's ?

8. One of the first two men to appear on a US postage stamp is also apparently the inventor of the rocking chair . Who is it ?

9. Although they couldn't object at the time, what do Soviet leader Vladimir Lenin and Albert Einstein both have in common ?

10. What colour do most people in Muslim countries and the Chinese wear when in mourning ?
a. black
b. white
c. red
d, green

4. Music requests on the radio.  DJ's were not allowed to play requests because it was feared agents and sabateurs might be able to communicate with each other.

5. Genghis Khan Genghis Khan c. 1162?1227), born Tem?jin (meaning "ironworker"), was the Mongol founder, Khan (ruler) and posthumously declared Khagan (emperor) of the Mongol Empire, the largest contiguous empire in history. He came to power by uniting many of the nomadic tribes of northeast Asia. After founding the Mongol Empire and being proclaimed "Genghis Khan", he started the Mongol invasions and raids of Kara-Khitan Khanate, Caucasus, Khwarezmid Empire, Western Xia and Jin Dynasty. During his life, the Mongol Empire eventually occupied substantial portion of Central Asia. 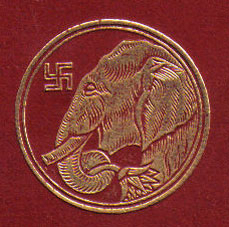 8. Benjamin Franklin While his electrical work was his greatest scientific achievement, Franklin also contributed to knowledge of heat conduction, storms, the Gulf Stream, etc., and invented bifocal glasses, the rocking chair, daylight saving time, and more. He might have done more still, but after he had been working for only a few years on electricity, his country called him to other tasks. He put aside his researches reluctantly and even into his old age kept hoping to return to them.

9. After their death both had their brains removed, sliced up and preserved. Albert Einstein's brain has often been a subject of research and speculation. Einstein's brain was removed within seven hours of his death. The brain has attracted attention because of Einstein's reputation for being one of the foremost geniuses of the 20th century, and apparent regularities or irregularities in the brain have been used to support various ideas about correlations in neuroanatomy with general or mathematical intelligence. Scientific studies have suggested that regions involved in speech and language are smaller, while regions involved with numerical and spatial processing are larger. Other studies have suggested an increased number of Glial cells in Einstein's brain.