HomeGeographyCountries of the world - By longest Coastline

This is a list of countries by length of coastline, in kilometres, based on data for the year 2008 by the CIA World Factbook.

A coastline of zero indicates that the country is landlocked. 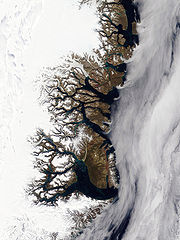 This 'magnifying' effect is greater for convoluted coastlines than for relatively smooth ones. For example, as seen on satellite image websites, the length of Canada's very convoluted coastline at a scale interval of 500 km is only about 20,000 km, less than a tenth of the value given in the table. On the other hand, Australia's coastline at 500 km intervals is about 12,500 km, around half the value in the table.

The coast/area ratio measures how many meters of coastline correspond to every square kilometer of land area. The ratio illustrates the ease of accessibility to the country's coast from every point in its interior. Therefore, an island country like Maldives, or a country carved by the sea like Greece, is more likely to have a high ratio, while a landlocked country like Austria will have a ratio of zero.