HomeGeographyList of straits around the world 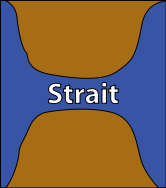 A strait is a narrow channel of water that connects two larger bodies of water, and thus lies between two land masses. The terms strait, channel, passage, sound, and firth can be synonymous and interchangeable, although each is sometimes differentiated with varying senses. Many straits are economically important. Straits can lie on important shipping routes, and wars have been fought for control of these straits.

Numerous artificial channels, called canals, have been constructed to connect two bodies of water over land. Although rivers and canals often form a bridge between two large lakes or a lake and a sea, and these seem to suit the formal definition of straits, they are not usually referred to as straits. Straits are typically much larger, wider structures that do not have water running in a single direction, and normally connect two seas.

Well-known straits in the world include: