1. John Spilsbury is credited with putting together which baffling invention in the 1760s?

2. A plot element in a film is often called which one of the following?
a. Macbeth
b. Macduff
c. MacGuffin
d. Macleod

3. The old name for which island country stems from the Latin word for beautiful?

4. Which sport legend was given the nickname Le Crocodil?

5. On the Voyager 1 spacecraft there is a golden record with greetings in different languages and a collection of various Earth sounds. There is also a 90 minute recording of music from many cultures. Which two composers appear the most on this record?

6. Which politician is the co-author of the book Judo:  History, Theory, Practice?

7. What are the signature songs for each of the following characters?
a. Kermit the Frog
b. The Cookie Monster

9. The following words are from which songs with the word 'world' in the song title?
a. It's the only thing that there's just too little of
b. But it wouldn't be nothing without a woman or a girl
c. That's great, it starts with an earthquake
d. Jeremiah was a bullfrog
e. Don't know much about the French I took
f. Well gidy up gidy up and get away
g. Birds sing out of tune and rain clouds hide the moon
h. Other eyes see the stars up in the skies, but for me they shine in your eyes

10. Fabulated Marshmellows, Protozoic Spliff, and Netherworldy Mugwumps are all examples of a two word search query that returns exactly one hit in google. What are these queries called?

1. Jigsaw puzzle John Spilsbury was a London-based mapmaker and engraver who invented the jigsaw puzzle back in 1767. His first puzzle was a map of the world, simply a map of the world attached to a large piece of wood. He cut out each country from the piece of wood and gave the completed puzzle to a geography teacher so that his students could learn where the countries were by reassembling the map of the world. It took a 133 years for the first puzzle for adults to be invented and only eight years after that, a worldwide craze for these puzzles was in full swing.

2. c. MacGuffin A MacGuffin (sometimes McGuffin) is "a plot element that catches the viewers' attention or drives the plot of a work of fiction." Sometimes, the specific nature of the MacGuffin is not important to the plot such that anything that serves as a motivation serves its purpose. The MacGuffin can sometimes be ambiguous, completely undefined, generic or left open to interpretation. The MacGuffin is common in films, especially thrillers. Commonly, though not always, the MacGuffin is the central focus of the film in the first act, and later declines in importance as the struggles and motivations of characters play out. Sometimes the MacGuffin is all but forgotten by the end of the film.

3. Formosa  Taiwan (also known as Formosa, from Portuguese: (Ilha) Formosa, meaning "beautiful (island)"), is the largest island of the Republic of China (ROC) in East Asia. Taiwan is located east of the Taiwan Strait, off the southeastern coast of mainland China. Since the end of World War II in 1945, the island group has been under the government of the Republic of China.

4. Rene LacosteJean Ren? Lacoste (1904 - 1996) was a French tennis player and businessman, nicknamed "the Crocodile" by fans because of his pugnacity on court; he is now known primarily as the namesake of the Lacoste tennis shirt, which he introduced in 1929. Lacoste was one of The Four Musketeers, French tennis stars who dominated the game in the 1920s and early 1930s.  He won seven Grand Slam singles titles in the French, American, and British championships but never made the long trip to Australia to play in their championships. He was the world number one player for both 1926 and 1927. 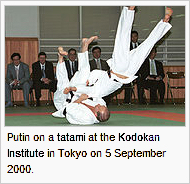 6. Vladimir Putin One of Putin's favorite sports is the martial art of judo. Putin began training in sambo (a martial art that originated in the Soviet Union) at the age of 14, before switching to judo, which he continues to practice today. Putin won competitions in his hometown of Leningrad (now Saint Petersburg), including the senior championship of Leningrad. He is the President of the Yawara Dojo, the same Saint Petersburg dojo he practiced at when young. Putin co-authored a book on his favorite sport, published in Russian as Judo with Vladimir Putin and in English under the title Judo: History, Theory, Practice. Though he is not the first world leader to practice judo, Putin is the first leader to move forward into the advanced levels.

7. Two answers
a. Bein Green and
b. C is for cookie

8. A foreigner. Gaijin means 'outside person'.

9. Eight answers
a. What the world needs now is love sweet love (David and Bacharach)
b. It's a man's man's man's world (James Brown)
c. It's the end of the world as we know it (REM)
d. Joy to the world (Three Dog Night)
e. Wonderful world (Sam Cooke)
f. Rockin all over the world (John Fogerty, Status Quo)
g. A world without love (Peter and Gordon)
h. You're my world (Cilla Black)

10. GooglewhacksA Googlewhack is a Google search query consisting of two words that return a single result. A Googlewhack must consist of two actual words found in a dictionary. A Googlewhack is considered legitimate if both of the searched-for words appear as live links to Answers.com, in the blue bar above the Google results.