1. Once upon a time, which terrifying animal's name was the Latin for 'robber'?

4. What kind of animal is each of the following?
a. painted lady
b. king shag
c. Percheron

7. A male Phasianidae is a peacock. What is the female called?

9. Which unit of measurement is equal to 3.26 light years?

1. Raptor Raptus is the Latin for "seized", from rapere "to seize". In Roman law the term covered many crimes of property, and women were considered property. Origin of the word 'rape'.

2. Palindromes. Note, a palindrome can also be read upside down as in 1961. 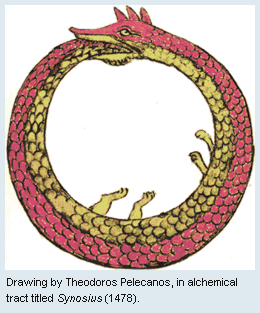 3. An ancient Egyptian or Greek serpent with its tail in its mouth. (see right) The Ouroboros, also spelled Ourorboros, Oroborus, Uroboros or Uroborus, is an ancient symbol depicting a serpent or dragon swallowing its own tail and forming a circle. It has been used to represent many things over the ages, but it most generally symbolizes ideas of cyclicality, unity, or infinity.

The ouroboros has been important in religious and mythological symbolism, but has also been frequently used in alchemical illustrations. More recently, it has been interpreted by psychoanalysts, such as Carl Jung, as having an archetypical significance to the human psyche. The name ouroboros (or, in Latinized form, uroborus), means "tail-devourer".

The depiction of the serpent is believed to have been inspired by the Milky Way, as some ancient texts refer to a serpent of light residing in the heavens

6. Ottoman The Ottoman Empire (1299?1923) (Old Ottoman Turkish: Devlet-i ?liye-yi Osm?niyye, Late Ottoman and Modern Turkish: Osmanlı Devleti or Osmanlı İmparatorluğu), was a Turkish state. The state was known as the Turkish Empire or Turkey by its contemporaries. It was succeeded by the Republic of Turkey, which was officially proclaimed on October 29, 1923.
An ottoman is a piece of furniture, a padded, upholstered seat or bench having neither back nor arms, often used as a stool or footstool, or in some cases as an improvised coffee table. An ottoman can also be known as a footstool, tuffet, hassock or pouf. The word ottoman was introduced into English in the "footstool" sense in 1806 (probably from the identical French word, which also denotes a type of textile fabric), because the ottoman's typical use in a reclining position was associated in Europe with the Orient, in line with fashionable Turkish influence since the early 18th century (when the Balkans were still partially under Ottoman rule).

9. Parsec The parsec ("parallax of one arcsecond", symbol pc) is a unit of length, equal to just over 30 trillion kilometres. The parsec is used in astronomy, and its length is defined as the distance from the sun at which two imaginary lines?one projected from the Earth, and one projected from the sun at a right angle to the Earth's orbital plane?intersect in space at an angle of 1 arcsecond. 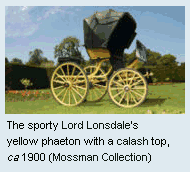 10. A four wheeled carriage which was owner driven. Phaeton is the early 19th-century term for a sporty carriage drawn by a single horse or a pair, typically with four extravagantly large wheels, very lightly sprung, with a minimal body, fast and dangerous. It usually had no sidepieces in front of the seats. The rather self-consciously classicizing name refers to the disastrous ride of mythical Pha?ton, son of Helios, who set the earth on fire while attempting to drive the chariot of the sun. The most spectacular phaeton was the English four-wheeled high flyer. The mail and spider phaetons were much more reasonably constructed. The mail phaeton was used chiefly to convey passengers with luggage and was named for its construction, using mail springs originally designed for use on mail coaches. The spider phaeton, of American origin and made for gentlemen drivers, had a very high carriage of light construction, with a covered seat in front and a footman's seat behind. Fashionable phaetons used at horse shows included the Stanhope, typically having a high seat and closed back, and the Tilbury, a light two-wheeled carriage with an elaborate spring suspension system, with or without a top.