2. In literature,  King Richard III was desperate and willing to pay a high price for what?

3. In which films would one find the following ships?
a. Acheron
b. Exxon Valdez
c. Orca
d. Andrea Gail

4. A colour and the name for a runaway slave in 17th and 18th century West Indies.

5. In which five US states has the USA tested atom bombs?

6. What does a woman raise and hold up in a Pabana?

7.In a popular very early 1960's TV series John Drake was better known to viewers under another name. The name is also the title of the series. What is it?

9. The name for which delightful and lofty empyrean goal stems from the Persian word for 'walled enclosure'?

10. Which man, who asked us all to envisage there is no empyrean goal, was responsible for composing three 1981 UK number one hit singles? 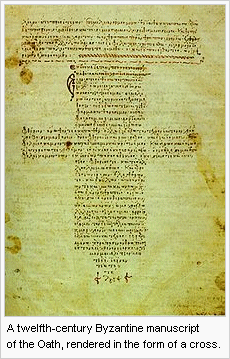 1. Aesculapius, Hygieia and Panacea. The Hippocratic Oath is an oath traditionally taken by physicians pertaining to the ethical practice of medicine. It is widely believed that the oath was written by Hippocrates, the father of medicine, in the 4th century BC, or by one of his students. It is thus usually included in the Hippocratic Corpus. Classical scholar Ludwig Edelstein proposed that the oath was written by Pythagoreans, a theory that has been questioned due to the lack of evidence for a school of Pythagorean medicine. Although mostly of historical and traditional value, the oath is considered a rite of passage for practitioners of medicine, although it is not obligatory and no longer taken up by all physicians.

I swear by Apollo, Asclepius, Hygieia, and Panacea, and I take to witness all the gods, all the goddesses, to keep according to my ability and my judgment, the following Oath...

6. Her skirt. The Pabana (or Peacock dance) is a solemn and stately Spanish dance.

7. Danger Man (or Secret Agent) Danger Man was a British television series broadcast between 1960 and 1962, and again between 1964 and 1968. This series featuring Patrick McGoohan as secret agent John Drake. Ralph Smart created the programme and wrote many of the scripts. The show was broadcast under the titles 'Secret Agent' and D'estination Danger' in non-UK markets.

9. Paradise Empyrean, from the Medieval Latin empyreus, an adaptation of the Ancient Greek, "in or on the fire (pyr)", properly Empyrean Heaven, is the place in the highest heaven, which in ancient cosmologies was supposed to be occupied by the element of fire (or aether in Aristotle's natural philosophy).