3. After the investigation, why was all the Challenger Space Shuttle wreckage buried under 50 tons of concrete?

5. Cebuano, Fula, Gujarati and Kannada are all examples of what?

6. Since 1950, name the three men who have lost four Wimbledon singles finals.

7. Which kind of elephant has the greatest sexual dimorphism (difference in size, weight and appearance between males and females) amongst all mammals?

8. What is the scientific name for a junction between two neurons?

10. Kirk Douglas, Paul Newman, Marlon Brando and Ed Sullivan all had a shakey hair raising turn with Charlton Heston in what? 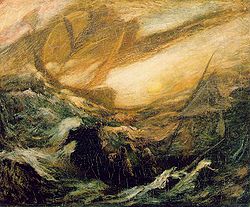 1. The Flying Dutchman The Flying Dutchman, according to folklore, is a ghost ship that can never go home, doomed to sail the oceans forever. The Flying Dutchman is usually spotted from afar, sometimes glowing with ghostly light. It is said that if hailed by another ship, its crew will try to send messages to land or to people long dead. In ocean lore, the sight of this phantom ship is a portent of doom.

There have been many reported sightings in the 19th and 20th centuries. One was by Prince George of Wales (later King George V of the United Kingdom). During his late adolescence, in 1880, with his elder brother Prince Albert Victor of Wales (sons of the future King Edward VII), he was on a three-year voyage with their tutor Dalton aboard the 4,000-tonne corvette Bacchante. Off Australia, between Melbourne and Sydney Scientists have offered a more recent explanation. An effect known as looming occurs when rays of light are bent across different refractive indices. This could make a ship just off the horizon appear hoisted in the air.

3. To prevent the parts being sold as souvenirs. Challenger was named after HMS Challenger, a British corvette which carried out a pioneering global marine research expedition in the 1870s

7. Elephant Seal. (The Southern Elephant Seal) Sexual dimorphism is the systematic difference in form between individuals of different sex in the same species. Examples include color (specifically referred to as sexual dichromatism), size, and the presence or absence of parts of the body used in courtship displays or fights, such as ornamental feathers, horns, antlers or tusks. In many species, including most mammals, the male is larger than the female. In others, such as most insects, spiders, reptiles and amphibians, many fish, and certain mammals such as the spotted hyena, the female is larger than the male. Other sex-specific differences include differences in coloration (sexual dichromatism), presence vs. absence of certain body parts (such as horns, antlers, tusks or display feathers), size of the eyes (some insects), possession of stings (various kinds of Hymenoptera), and different thresholds for certain behaviors (aggression, infant care, etc).

10. A chariot. They all went for a high speed spin with Mr Heston on the Ben Hur film set.