"If possible, compute in the nude"
-- "Static Electricity is a killer", 'Supercharging MS-DOS' by Microsoft Press

1. The actress Shirley Eaton is best remembered for a colourful nude scene in which film?

2. In which films did the following men wrestle naked?
a. Alan Bates and Oliver Reed
b. Viggo Mortenson

3. The following words are from which songs?
a. was found in the nude
b. there he goes, look at that, look at that, and he ain't wearing no clothes
c. all the cats who dig striptease, prayin for a little breeze
d. bet even the President of the United States sometimes must have to stand naked

5. Complete the following film titles with a revealing word?
a. Lunch
b. The Bomb

6.  Marilyn Cole revealed quite a lot of her naval background when she became the first woman to pose with unrestricted full frontal nudity in Playboy magazine. Which English island city was she from?

7. Many famous singers have posed for Playboy magazine. With the aid of the following initials, name the singer.
a. L.J.
b. N.S.
c. S.F.
d. B.C.

8. Who released the eye catching 1965 album 'Whipped cream and other delights' depicting a woman covered only in whipped cream?

9. Another word for a topless bikini.  Eight letters

10. Which country western singer said
"Sometimes I like to run naked in the moonlight and the wind on a little trail behind our house when the honeysuckle blooms"
a. Willie Nelson
b. Waylon Jennings
c. Dolly Parton
d. K.D. Lang

1.  Goldfinger.  As Jill Masterson, the woman who was painted gold and died of "skin suffocation"

2. Two Answers
a. Women in love
b. Eastern Promises 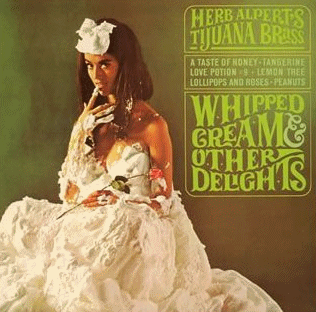