Note, considering the 'Golden Age' of TV westerns was during the 50s and 60s, this quiz may not be suitable for young wippersnappers. However if you are a ke mo sah bee of the genre, have fun! 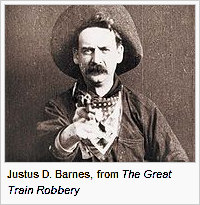 2. In the TV series 'Have Gun Will Travel', what symbol was found on gun fighter Palidin's calling card and holster?

3. Britt, the son of the Lone Ranger's nephew later went on to become which colourful non western crime fighter?

5. In which TV western did the theme song describe the hero with the words "luck is a lady he loves best"?

6. Which TV western was based on a popular 1902 wild west novel by Owen Wister?

7. In Bonanza, which fashion accessory did the actors Pernell Roberts, Dan Blocker and Lorne Greene all wear?

8. Linda Evans of Dynasty fame made her acting debut in which TV western?

10. In which TV western was the arch villian Dr Miguelito Quixote Loveless, a dwarf with an obsession for wealth and power?