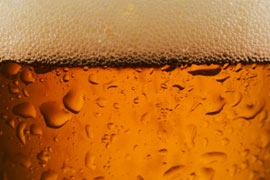 2. What is the only country outside of Europe in the Top Ten for annual per capita consumption of beer ?

3. A widget inside of a can of beer is an aid in producing a good head of beer. What is inside the pressurised pellet ?

4. Until the 15th century, which basic beer ingredient was not added to ale ?

6. Complete the following line from Monty Pythons 'The Philosophers Song' with the last name of a philosopher.  "And Wittgenstein was a beery swine, Who was just as schloshed as ......"

7. What is the liquid created by the mashing of malted barley called ?  Four letters (it's not beer)

9. In which film does one hear the following narration ?  "We sat and drank beer with the sun on our shoulders and felt like free men. Hell, we could have been tarring the roof on one of our own houses. We were the lords of all creation"

8. Out of control inflation