1. When in season, which type of vegetable does one associate with muskat, spaghetti and butter nut?

2. The world's shortest war in history lasted just 38 minutes. It was fought in 1896 between Zanzibar and which European nation?

5. What is the biggest export of North Korea?

6. Who infamously addressed one of his letters to the London police with the words "From Hell" ?

7. If you PORTAGE a canoe, what are you doing?

8. What type of clock did Harrison invent?

9. The following lyrics come from which famous song?
'And the operator says, "forty cents more for the next three minutes".
'Please Mrs. Avery, I gotta talk to her I'll only keep her a while'

10. What is the more common word for IPSATION? 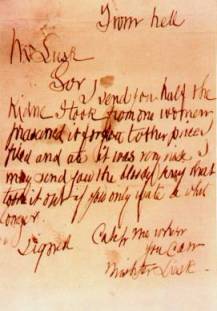 6 Jack the Ripper On October 16th George Lusk, the president of the Whitechapel Vigilance Committee, received a three-inch-square cardboard box in his mail. Inside was half a human kidney preserved in wine, along with the following letter. Medical reports carried out by Dr. Openshaw found the kidney to be very similar to the one removed from Catherine Eddowes, though his findings were inconclusive either way. The letter read as follows:

From hell.
Mr Lusk,
Sor
I send you half the Kidne I took from one woman and prasarved it for you tother piece I fried and ate it was very nise. I may send you the bloody knif that took it out if you only wate a whil longer
signed
Catch me when you can Mishter Lusk

8. A chronometer - a maritime clock