1. In which two films does Henry Fonda play the US President; and in which monumental film does he play the 'Medal of Honor' winning son of US President Teddy Roosevelt?

3. In which country are the most UN peace keeping troops stationed?  (Nov 2008)
a. USA
b. Cyprus
c. Afghanistan
d. Democratic Republic of Congo

4. Which famous building, once the largest of its kind in the world, means 'Holy Wisdom' when translated?

5. James Madison was the first US President to sport which clothing fashion?

7. Which 'big man' is credited with discovering a route through the Cumberland Pass in frontier America?

8. Although its name is a synonym for 'no apprehension', which massive revolutionary invention, first introduced in 1906, instilled fear all over the world?

9. Which three animals(humans excluded) are directly responsible for  the most deaths each year in the USA? (The mosquito is excluded, as are fatalities resulting from a car crash with animals)

10. Which land mammal has the highest blood pressure?  (it's obvious)

1. Fonda plays the US President in 'Fail Safe' and 'Meteor'. In 'The longest day' he plays Teddy Roosevelt Jr. The Longest Day is a 3-hour-long 1962 war film with a very large cast, based on the 1959 history book The Longest Day by Cornelius Ryan, about "D-Day", the invasion of Normandy on 6 June 1944, during World War II. The film, one of the very few 1960s epics made in black and white, features a large ensemble cast including actors such as Kenneth More, Richard Todd (who took part in the actual invasion), Richard Burton, Robert Mitchum, Sean Connery, Henry Fonda, Red Buttons, Leo Genn, Peter Lawford, Gert Frobe, John Wayne, Irina Demick, Curt Jurgens and Robert Wagner. Several of these actors played roles that were virtually cameo appearances.

2. They are/were all missing a finger or fingers. 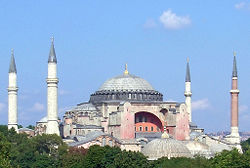 4. Hagia Sophia in Instanbul Hagia Sophia (Turkish: Ayasofya, Greek: Hagia Sophia; "Holy Wisdom", Latin: Sancta Sophia or Sancta Sapientia) is a former patriarchal basilica, later a mosque, now a museum in Istanbul, Turkey. Famous in particular for its massive dome, it is considered the epitome of Byzantine architecture. It was the largest cathedral ever built in the world for nearly a thousand years, until the completion of the Seville Cathedral in 1520. The current building was originally constructed as a church between A.D. 532 and 537 on the orders of the Byzantine Emperor Justinian, and was in fact the third Church of the Holy Wisdom to occupy the site (the previous two had both been destroyed by riots). It was designed by two architects, Isidore of Miletus and Anthemius of Tralles. The Church contained a large collection of holy relics and featured, among other things, a 50 foot (15 m) silver iconostasis. It was the patriarchal church of the Patriarch of Constantinople and the religious focal point of the Eastern Orthodox Church for nearly 1000 years.

7. Daniel Boone Daniel Boone (1734 ? 1820) was an American pioneer and hunter whose frontier exploits made him one of the first folk heroes of the United States. Boone is most famous for his exploration and settlement of what is now the U.S. state of Kentucky, which was then beyond the western borders of the Thirteen Colonies. Despite resistance from American Indians, for whom Kentucky was a traditional hunting ground, in 1775 Boone blazed the Wilderness Road through the Cumberland Gap and into Kentucky. There he founded Boonesborough, one of the first English-speaking settlements beyond the Appalachian Mountains. Before the end of the 18th century, more than 200,000 people entered Kentucky by following the route marked by Boone.