1. Which abnormally elevated mood was first coined by the Daily Mirror newspaper on the 2nd November 1963?

2. Which astronomical occurance popularized in a song title never occurs in February? 2 words

3. The Royal Navy rum ration was first introduced in 1687. Plus or minus 10 years, in which year was it abolished?

5. Which popular collectors piece takes its name from the Old English word for a type of orange clay?

6. In Greek mythology, who was the father of each of the following figures?
a. Helena
b. Paris
c. Hermaphroditos
d. The Minotauros

7. Musicians have a habit of giving their children unusual names. Name the father of each of the following.
a. Dandelion
b. Zowie
c. Dweezil
d. Heavenly Hiraani Tiger

9. The name for which vehicle probably stems from a World War I phrase for a dirty weekend in Paris?

1. Beatlemania Beatlemania is a term that was used during the 1960s to describe the intense fan frenzy particularly demonstrated by young teen girls directed toward The Beatles during the early years of their success. The word is a portmanteau of "Beatles" and "mania". Andi Lothian, a former Scottish music promoter, claims that he coined the term in 1963, although an early printed use of the word is in The Daily Mirror on the 2nd of November 1963 in a news story about the previous day's Beatles concert in Cheltenham. Many fans across the world were known to have Beatlemania, which hit the United States hard after The Beatles performed on The Ed Sullivan Show in 1964. 'Beatlemania' was characterised by intense levels of hysteria demonstrated by fans both at the actual concerts played by the band and during the band's arrivals and travels to and from locations. 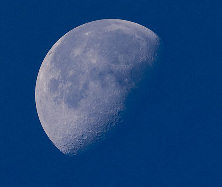 2. Blue Moon A blue moon is a full moon that is irregularly timed according to some calendars. Most years have twelve full moons which occur approximately monthly, but in addition to those twelve full lunar cycles each calendar year contains an excess of roughly eleven days. The extra days accumulate, so that every two or three years there is an extra full moon (this happens every 2.71722874 years). The extra moon is called a "blue moon." Different definitions place the "extra" moon at different times. Recent popular usage defines a blue moon as the second full moon in a month. The term "blue moon" is commonly used metaphorically to describe the rarity of an event, as in the saying "once in a blue moon."

4. Munsters The original Victorian home of the Munster family was at 1313 Mockingbird Lane in the fictional Mockingbird Heights. The town's location is not specified in the series, but in later incarnations is described as a small town outside of Los Angeles, California. In reality, the exterior shots were filmed on the Universal Studios backlot. The house was built in 1946 for the movie So Goes My Love. It was then put into storage for several years. Then sometime in the fifties, it, along with other Facades, were assembled with other homes on the back lot which was called River Road. Until production of The Munsters in 1964 the house could be seen as a back drop on many shows including Leave it to Beaver. It was remodeled and featured on Desperate Housewives and located on Colonial Street in the backlot (which has now been officially dubbed "Wisteria Lane" by the studio). It was also the home of the family in Shirley (ABC, 1979-80) and has also appeared in other TV shows such as Coach and Leave it to Beaver. The interiors were contained entirely on an enclosed sound stage.

5. Piggy Bank (from pygg) In Middle English, "pygg" referred to a type of clay used for making various household objects such as jars. People often saved money in kitchen pots and jars made of pygg, called "pygg jars". By the 18th century, the spelling of "pygg" had changed and the term "pygg jar" had evolved to "pig bank."  Once the meaning had transferred from the substance to the shape, piggy banks began to be made from other substances, including glass, plaster, and plastic. In a curious case of parallel evolution, the Indonesian term celengan (a celeng is a wild boar, with the "an" affix used to denote a likeness) was also used in the context of domestic banks. The etymology of the word is obscure, but evident in a Majapahit piggy bank from the 15 century A.D.

8. 'Bob's your uncle' It's a catch phrase dating back to 1887, when British Prime Minister Lord Salisbury decided to appoint a certain Arthur Balfour to the prestigious and sensitive post of Chief Secretary for Ireland. Not lost on the British public was the fact that Lord Salisbury just happened to be better known to Arthur Balfour as "Uncle Bob." In the resulting furor over what was seen as an act of blatant nepotism, "Bob's your uncle" became a popular sarcastic comment applied to any situation where the outcome was preordained by favoritism. As the scandal faded in public memory, the phrase lost its edge and became just a synonym for "no problem."

9. Chitty Chitty Bang Bang Chitty Chitty Bang Bang: The Magical Car is a children's book written by Ian Fleming (creator of James Bond) for his son Caspar, with illustrations by John Burningham. It was first published in 1964 by Jonathan Cape in London and Random House in New York, and later made into a successful film.