1. An embossed buffoon's hat with bells gave which product its name?

2. The following line is from which classic MGM film?
"She's going down south, grandfather. She's going toward Yorkshire."

3. Paris attracts the most visitors in France each year. Which French town attracts 5 million visitors a year and has more hotels than any other French city except Paris?

4. Louisette was the original name for a famous decollator. What is the more common name for this device?

5. In which songs would you find the following descriptions of evil doers?
a. there was a cat that really was gone
b. his brain is squirmin like a toad
c. he's the hairy handed gent who ran amok in Kent
d. he got a 32 gun in his pocket for fun he got a razor in his shoe
e. talkin about saving souls and all the time leeching, dealing in debt and stealing in the name of the lord
f. public enemy number one, running and hiding from every American lawmans gun

6. The name Deianira means 'destroyer of her husband'. Who was Deianira's heroic husband?

7. The name of which edible product stems from the Portugese word for the quince fruit?

9. Which suave and sophisticated actor played the role of Beau Maverick, Bret Maverick's English cousin in the US television series Maverick?

10. Some wills are strange, which famous man left his wife his second best bed?

1. Foolscap paper. (the original watermark was a fools cap with bells) Foolscap folio is paper cut to the size of 8? ? 13? inches (216 ? 343 mm). This was a traditional paper size used in Europe and the Commonwealth, before the adoption of modern international paper A4 paper (the most common standard size outside the United States and Canada). It is a common size for ring binders/lever arch files containing A4 paper because it offers greater protection to the edge of the pages than an A4 binder, as foolscap size is larger than A4 paper size. A full foolscap paper sheet is 17 x 13? inches (432 ? 343 mm) in size, and a folio sheet of any type is simply half the standard sheet size. Foolscap was named after the fool's caps and bells watermark commonly used from the fifteenth century onwards on paper measuring 17 ? 13? inches (432 ? 343 mm) or a subdivision of this into halves, quarters and so on. The earliest example of such paper that is firmly dated was made in Germany in 1479.

3. Lourdes Lourdes is a small market town lying in the foothills of the Pyrenees, famous for Marian apparitions that are reported to have occurred in 1858. At that time, the most prominent feature was the fortified castle that rises up from the center of the town on a rocky escarpment. Following the reports that Our Lady of Lourdes had appeared to Bernadette Soubirous on several occasions, Lourdes has developed into a major place of Christian pilgrimage and of alleged miraculous healings. The 150th Jubilee of the first apparition took place on February 11 2008 with a outdoor mass attended by approx 45,000 pilgrims. Today Lourdes has a population of around 15,000 inhabitants but is able to take in some 5,000,000 pilgrims and tourists every season. With about 270 hotels, Lourdes has the second greatest number of hotels in France after Paris. 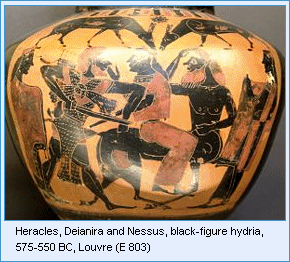 6. Heracles De?anira or Dejanira (De?aneira 'man-destroyer' or 'destroyer of her husband' ) is a figure in Greek mythology, best-known for being Heracles' third wife and, in the late Classical story, unwittingly killing him with the Shirt of Nessus.

10. Will Shakespeare In his will, Shakespeare left the bulk of his large estate to his elder daughter Susanna. The terms instructed that she pass it down intact to "the first son of her body". The Quineys had three children, all of whom died without marrying. The Halls had one child, Elizabeth, who married twice but died without children in 1670, ending Shakespeare?s direct line.

Shakespeare's will scarcely mentions his wife, Anne, who was probably entitled to one third of his estate automatically. He did make a point, however, of leaving her "my second best bed", a bequest that has led to much speculation. Some scholars see the bequest as an insult to Anne, whereas others believe that the second-best bed would have been the matrimonial bed and therefore rich in significance.