1. Why did many radio stations around the world observe two minutes of silence in late July, 1937?

2. Which word meaning uproarious is derived from the nickname that was given to the psychiatric institution The Hospital of St. Mary of Bethlehem in London?

3. Which two Disney 'characters' appear in the Bond film Diamonds Are Forever?

4. Why did many Americans turn off their lights for one minute on the 21st of October 1931?

5. Robert, Aurore, Apple, White, Mornay, Ivory and Reform are all examples of what?

7. In song, which famous historical figure preceeds the following words?
a. ... plays the mamba, listen to the radio
b. ... read a book on Marx
c. ... do you remember the bills you have to pay
d. ... tried to make that town his own

8. Many people considered FBI director J. Edgar Hoover a shady character.  Hoover once ordered his aides to watch their step and not do what?

9. Which large vehicle is also a name for Krishna meaning 'Lord of the Universe'?

10. Which frightening 1963 film set in Bodega Bay has no music score?

1. A tribute to Marconi after his death. Marchese Guglielmo Marconi (25th April 1874 ? 20th July 1937) was an Italian inventor, best known for his development of a radiotelegraph system, which served as the foundation for the establishment of numerous affiliated companies worldwide. He shared the 1909 Nobel Prize in Physics with Karl Ferdinand Braun, "in recognition of their contributions to the development of wireless telegraphy". Later in life, Marconi was an active Italian Fascist and an apologist for their ideology (such as the attack by Italian forces in Ethiopia).

2. Bedlam The Bethlem Royal Hospital of London is a psychiatric hospital in Beckenham, Kent. Although no longer in its original location and buildings, it is recognised as the world's first and oldest institution to provide care for the mentally ill. It has been variously known as St. Mary Bethlehem, Bethlem Hospital, Bethlehem Hospital and Bedlam. The word bedlam, meaning uproar and confusion, is derived from its name.

4. A tribute to Edison on the day of his funeral.

6. Grand Master of the Knights Templar. Or 'last Templar'. Jacques de Molay (est. 1244?5/1249?50 ? 18 March 1314) was the 23rd and officially last Grand Master of the Knights Templar, leading the Order from approximately 1292 until the Order was dissolved by order of the Pope in 1312. He is probably the best known Templar, along with the Order's founder and first Grand Master, Hugues de Payens (1070-1136). His goal as Grand Master was to reform the Order, and adjust it to the situation in the Holy Land during the waning days of the Crusades. With no crusader states remaining to protect, and with other problems surfacing, the right of the Order to exist had come into question. King Philip IV of France, deeply in debt to the organization, had De Molay and many other French Templars arrested in 1307 and tortured into false confessions. When De Molay later retracted his confession, Philip had him burned at the stake on the ?le de la Cit?, an island in the Seine river in Paris, on 18 March 1314. 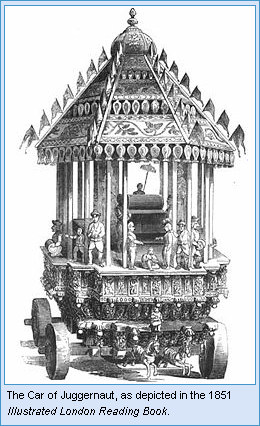 9. Juggernaut A juggernaut is a term used to describe a force regarded as unstoppable, that will crush all in its path or heavy in muscle The word is derived from the Sanskrit Jagannātha (meaning "Lord of the universe") which is one of the many names of Krishna from the ancient Vedic scriptures of India. One of the most famous of Indian temples is the Jagannath Temple in Puri, Orissa, which has the Ratha Yatra ("chariot procession"), an annual procession of chariots carrying the murtis (statues) of Jagann?th (Krishna), Subhadra and Baladeva (Krishna's elder brother). During the British colonial era, certain Englishmen promulgated a falsehood that Hindu devotees of Krishna were lunatic fanatics who threw themselves under the wheels of these chariots in order to attain salvation.

10. The Birds The Birds (1963) is a suspense film directed by Alfred Hitchcock, based on the short story of the same name by Daphne du Maurier. Unlike most other films of its era, The Birds does not have a music score or an ending in the conventional sense. The soundtrack was supervised by Bernard Herrmann; bird cries and wingflaps were played on an expanded Trautonium (called the Mixtur Trautonium) by Oskar Sala, assisted by German composer Remi Gassmann. The screenplay was written by Evan Hunter, who penned the 87th Precinct novels using the pseudonym "Ed McBain".