1. Calipee is used to make which slow food?

2. Why were there no registered births or deaths in England on September 3rd 1752?

3. Citizens of which country coined the term 'Molotov Cocktail' or 'Molotov Bread Basket' to describe their incendiary weapon used against the Soviets in 1939?

6. A question to chew on. What is the name of the famous department store in Moscow?

7. The Bridge of Sighs in Venice connected the Doge's palace with what?
a. a state prison and place of execution
b. a tax office
c. a cemetary
d. a Turkish bath house

8. Which street in London takes its name from a croquet-like game once played by Charles I ?

9. Which actor played the role of King Arthur in the film version of the musical Camelot?

10. It has been said that residents of which European capital city never sleep?

1. Turtle soup Calipee is a vital ingredient in turtle soup, it is the cartilage cut from the bones of the bottom shell

2. There was no September 3rd 1752. The British government adopted the Gregorian calendar.  It was decreed that the day following September 2nd 1752 should be called September 14.

4. Tee Hee Tee Hee Johnson is a fictional character in the James Bond novel and film Live and Let Die. In the film he was portrayed by Julius Harris. Tee Hee's name is derived from his tendency to chuckle and snicker to himself very often for little or no reason. As Bond states when he first meets the man: "Funny how the least little thing amuses him." 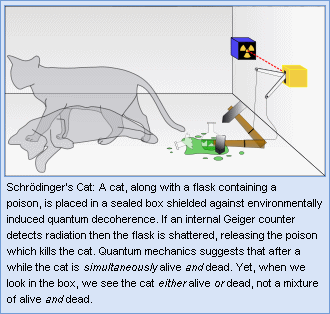 5. b. Schrödinger's cat Schrödinger's cat is a thought experiment, often described as a paradox, devised by Austrian physicist Erwin Schrödinger in 1935. It illustrates what he saw as the problem of the Copenhagen interpretation of quantum mechanics being applied to everyday objects. The thought experiment presents a cat that might be alive or dead, depending on an earlier random event. In the course of developing this experiment, he coined the term Verschr?nkung (entanglement).

6. GUM Glavnyi Universalnyi Magazin - Main Department Store or GUM (ГУМ, pronounced as goom, in full Главный Универсальный Магазин, Glavnyi Universalnyi Magazin) is a common name for the main department store in many cities of the Soviet Union and some post-Soviet states. The most famous GUM is a large store in Kitai-gorod of Moscow, facing Red Square. It is actually a shopping mall. Prior to the 1920s the place was known as the Upper Trading Rows.

7. a. A state prison and place of execution 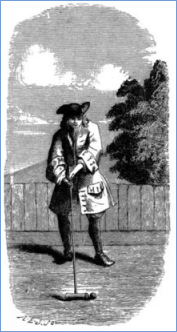 8. Pall Mall (See image to right)Pall mall or palle maille was a game played in the 16th and 17th centuries, and a precursor to croquet. The name comes from the Italian pallamaglio, which literally means "mallet-ball". It was played in a long alley with an iron hoop suspended over the ground at the end. The object was to strike a boxwood ball of about 1 foot (30cm) in circumference (about the same size as a modern croquet ball) with a heavy wooden mallet along the alley and through the hoop with the fewest hits possible. Pall mall was popular in Italy, France and Scotland, and spread to England in the 17th century. The name "pall mall" refers not only to the game, but also to the mallet used and the alley in which it was played.

9. Richard Harris Camelot is the 1967 film version of the successful musical of the same name. Richard Harris appears as Arthur, Vanessa Redgrave as Guenevere and Franco Nero as Lancelot. The film was directed by Joshua Logan. Though it is never explicitly stated, Tom, the boy in the final scene, may be Sir Thomas Malory, who would go on to write the great classic Le Morte d'Arthur.