1. Which Hollywood sex symbol did RAF pilots get into during World War II?

2. Tony Burrows is the only person to have appeared on the BBC's Top of the Pops as lead singer in three different bands during a single show (February 1970).  He was quite a busy man in the 60s and 70s. The following is a list of some of the songs in which he was the lead singer. Name the band.
a. Let's go to San Francisco
b. Love Grows
c. My Baby Loves Lovin'
d. Gimme Dat Ding
e. Beach Baby
f. United We Stand (as backing vocalist)

3. The original name of Sir Francis Drake's flagship Golden Hind was which kind of bird?

4. Bellus, a rogue red star and its companion planet Zyra threaten the earth and cause a Noah's Ark like scenario in which classic science fiction film?

5. In the song 'Science Fiction Double Feature', who "was ill the day the earth stood still"?

6. What kind of spring was responsible for chilling news between January and August 1968?

7. Which Olympic superstar was nicknamed 'The Czech Locomotive'?

8. What is the name of the London Underground station in which a mysterious Martian vehicle is found in the 1967 film "Quatermass and the Pit"?

9. Which Oscar winning actress is the mother of Michail Baryshnikov's daughter Aleksandra?

1. Mae West. The automatically inflatable lifejacket worn by RAF pilots was given the nickname Mae West. A personal flotation device (abbreviated as PFD; also referred to as, lifejacket, life preserver, Mae West, life vest, life saver, cork jacket, life belt, flotation suit, etc.) is a device designed to assist a wearer, either conscious or unconscious, to keep afloat with his or her mouth and nose (airway) of his or her head's face above the water surface when in or on water. The Mae West was a common nickname for the first inflatable life preserver, which was invented in 1928 by Peter Markus (1885-1974) (US Patent 1694714) with his subsequent improvements in 1930 and 1931. The nickname was originated due to the fact that someone wearing the inflated life preserver often appeared to be as physically-endowed as the actress Mae West. It was popular during the Second World War era with US and British Air Force servicemen who were issued inflatable Mae Wests.

2. Six answers
a. Flowerpot Men
b. Edison Lighthouse
c. White Plains
d. Pipkins
e. First Class
f. Brotherhood of Man Anthony "Tony" Burrows (born 1942, in Exeter, Devon) is a British session singer. He has been credited with singing lead on hit singles for more groups than any other recording artist, both on the UK singles charts and the US Billboard Hot 100 chart. 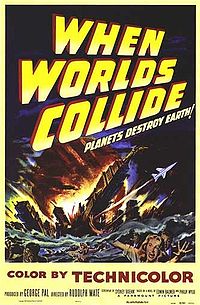 4. When Worlds Collide (1951) When Worlds Collide is a 1951 science fiction film based on the 1932 novel co-written by Philip Gordon Wylie and Edwin Balmer. The movie was filmed in Technicolor, directed by Rudolph Mat? and was the winner of the 1951 Academy Award for special effects. Producer George P?l considered making a sequel based on the novel After Worlds Collide, but the box office failure of his 1955 Conquest of Space made it impossible.

5. Michael Rennie Michael Rennie (25 August 1909 ? 10 June 1971) was an English film, television, and stage actor, best known for his starring role as the space visitor Klaatu in the 1951 classic science fiction film The Day the Earth Stood Still. Rennie also "appeared" on Broadway?in name, at least, in The Rocky Horror Show. The opening song, "Science Fiction Double Feature," begins with the lyrics "Michael Rennie was ill The Day the Earth Stood Still, but he told us where we stand..." ("and Flash Gordon was there in silver underwear, Claude Rains was The Invisible Man..." etc.) 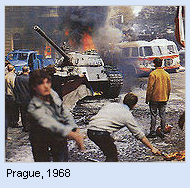 6. The Prague Spring The Prague Spring (Czech: Pra?sk? jaro, Slovak: Pra?sk? jar) was a period of political liberalization in Czechoslovakia during the era of its domination by the Soviet Union after World War II. It began on January 5, 1968, when reformist Slovak Alexander Dubček came to power, and continued until August 21, when the Soviet Union and members of its Warsaw Pact allies invaded the country to halt the reforms.

7. Emil Z?topekEmil Z?topek (1922 ? 2000) was a Czech athlete probably best known for winning three gold medals in long-distance events at the 1952 Summer Olympics in Helsinki. He won gold in the 5 km and 10 km runs, but his final medal came when he decided at the last minute to compete in the first marathon of his life. Z?topek was the first athlete to break the 29-minute barrier in the 10 km run (in 1954). Three years earlier, in 1951, he had broken the hour for running 20 km. He is widely considered to be one of the greatest runners of the 20th century and was also known for his brutally tough training methods.

8. Hobbs End (in the 58-59 tv series it is Hobb's Lane) Quatermass and the Pit is a 1967 British science-fiction / horror film, produced by Hammer Film Productions and based on the 1958 BBC Television serial of the same name. It was adapted by the writer Nigel Kneale from his own original television script, and directed by Roy Ward Baker. The film was designed by Bernard Robinson and scored by Tristram Cary. In the United States, it was released under the title Five Million Years to Earth.

9. Jessica Lange Jessica Phyllis Lange (born April 20, 1949) is an American stage and screen actress. With a career that has spanned thirty-five years and six Academy Award nominations, she may be most notable for her performances in Frances, Tootsie, Sweet Dreams and Blue Sky. Lange was married to photographer Paco Grande from 1970-1981. Since 1982, she has lived with playwright/actor Sam Shepard. She has three children, Aleksandra (born 1981) from her relationship with dancer/actor Mikhail Baryshnikov, and Hannah Jane (born 1985) and Walker Samuel (born 1987) with Shepard. 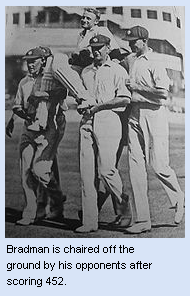 10. Don Bradman (from the song 'Our Don Bradman') Who is it that all Australia raves about?
Who has won our very highest praise?
Now is it Amy Johnson, or little Mickey Mouse?
No! it's just a country lad who's bringing down the house.