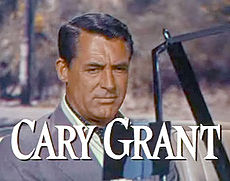 2. In which four Alfred Hitchcock films did Cary Grant play the leading man?

3. What was Cary Grant's real name?

5. Which three letters did Cary Grant use as medication in the early 1960s?

6. Who was the leading lady opposite Cary Grant in each of the following films?
a. Houseboat
b. North by Northwest
c. Charade
d, Father Goose
e. She done him wrong
f. To Catch a Thief

7. Gary Granite appeared in which program?

8. Who was the mother of Cary Grants only child Jennifer Grant?

9. A colourful and fragrant Hybrid Tea has been named after Cary Grant. What kind of Hybrid Tea?

10. Hollywood producers were quite happy about Cary Grant's stage name in the 1930s as the initials C. G. or G. C. were also those of the two biggest male box office attractions at the time.  Name the two actors.