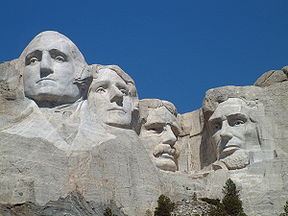 1. Which surname is shared by two US Presidents and a World heavyweight boxing champion?

2. Which American president had a complete nervous breakdown in 1919?

3. Who are the four US presidents whose faces are carved on Mt. Rushmore?

4. Which vegetable did George H Bush declare he hated and, as President, didn?t have to eat?

5. Who was the ex peanut farmer who became US President?

6. Who was the third President of America and chief author of the Declaration Of Independence?

7. The Great Depression began during the administration of which US President?

8. What did Hubert Humphrey lose?

9. Who became US president in 1963 after the assassination of John F Kennedy? (Full name please)

10. Which US President was never elected as President or Vice-president by the people?

12. Who became US Vice President after Spiro Agnew resigned?

14. Which song was the theme for Clinton?s Presidential campaign?

15. The portrait of which president graces an American dollar coin?

16. What is the name of the indirect system by which president and vice-president of the USA are elected?

17. Which US president invented the folding bed and the swivel chair?

18. Which US President avoided impeachment by one vote?

19. The 22nd and 24th presidents of the United States had the same mother and the same father, but were not brothers. How was this possible?

20. What?s the name of the president, played by Martin Sheen, in the west wing?

8. US Presidential election to Nixon

19. It was the same man - Grover Cleveland