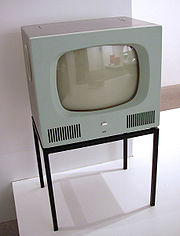 2. Who were the original two presenters of Crimewatch UK?

3. Who did David Dimbleby replace as the host on Question Time?

4. Who was the original voice of the Wombles when they first appeared on our televisions?

5. Who went from Food & Drink to The Great Antiques Hunt?

6. What is the name of Mrs Bucket?s son in ?Keeping Up Appearances??

7. On which UK TV programme did Clive James first appear?

8. Apart from ?Open All Hours? which other sitcom featured Ronnie Barker and David Jason?

9. Which 1970?s detective was played by William Conrad?

11. In which London borough is Eastenders set?

12. On which street do the Neighbours live?

13. Who owns The Cabin in Coronation Street?

15. In which city was Brookside set?

16. In which city would you find the bar Cheers?

17. Which husband and wife team enjoyed A Fine Romance?

18. Who was Blake Carrington?s first wife?

19. What was the name of Steptoes Horse?